i am OTHER is Pharrell Williams' company which celebrates people who are different. Who is the other, one asks? It could be those different or foreign. The new student in school, the refugee, the immigrant. To learn about the other adds depth to our analysis of consumers. To increase one's knowledge, it is important to travel and learn about other cultures. Subsequently, one could compare and contrast those cultures with one's own.

The recent exhibit "In Grand Style: Celebrations in Korean Art during the Joseon Dynasty," at the Asian Art Museum, provides a window, through art, of another time and culture. We learn of the Koreans' system of royal lineage, where political power could be inherited by women, although they could not be rulers. Think of powerful women in our history for analogy. 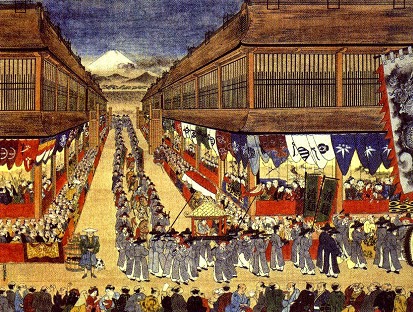 A painting of a king in front of a landscape signifies his relationship to and power similar to nature's. The five peaks behind him represent the universe. Current official governmental portraits or family photos reflect this painting.

The impressive 150 foot long scroll from 1795, "King Jeongjo's Procession to His Father's Tomb in Hwaseong" emphasizes the importance of commemoration for this culture. In this artwork, one understands the values of family, royalty and honoring one's parents. The commemorative quality reminds us of the incessant photography, Snapchat and Instagramming of our culture. The Koreans of the Joseon dynasty are the other, but not so different. We also want to record aspects of our lives. Through viewing other cultures, we may learn about our own. Thoughts on consumers...
Posted by Carol L. Weinfeld at 9:43 PM No comments:

The Art of Finesse

It is not often that people behind the scenes take center stage. Yet that happens in the documentary of a Steinway & Sons piano tuner in Vienna, Pianomania. We watch Stefan Knüpfer and his efforts to perfect pianos. Perhaps he will add felt inside a piano. Perhaps replace parts. Even add acoustic panels to the concert hall. To achieve excellence and accommodate his clients, he will do everything possible.

The main story consists of the preparation and search for pianos for a recording session of Bach's The Art of the Fugue by the renowned pianist Pierre-Laurent Aimard . (In other scenes, famous pianists such as Alfred Brendel and Lang Lang rehearse and perform.) Aimard plays several pianos and requests many variations to their sound. A twist to the plot includes the sale of a familiar piano, which disappoints the pianist. When the recording begins, the engineers also voice their opinions about the sound, which leads to more piano tuning.

The lessons for the viewer of this fascinating documentary are to have patience, and how to solve problems for clients. As they demand more and more of us, we learn about them and ourselves. Some clients are extremely difficult and finicky, but as we strive for perfection, the results could be brilliant and worth the trouble.